When Dan Hanauer, Sr. graduated from the University of Wisconsin with his Bachelors and Masters degrees in Botany and Horticulture in 1957, he did not envision starting a Christmas Tree Farm.  However, in 1966 he and Veronica planted some scotch pine Christmas trees on land acquired for a future home site and Hanauer’s Tree Farms was born. 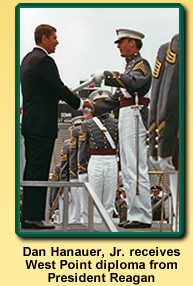 As time went on, Dan Jr. completed his active duty obligation to the U.S. Army, transitioned to the U.S. Army Reserve and joined Dan Sr. and Veronica full time on the Christmas Tree Farm.  Dave and the other Hanauer children all went on to other careers.

We believe in specialized diversity – we specialize in evergreens but within that context we offer the most diverse mix of carefully selected species, varieties and cultivars.  Our trees are available as cut Christmas trees, container trees and balled and burlapped.  We produce the finest trees for the most demanding customers, period.

Dan Jr. and Julie Hanauer, together with Dan Sr. and Veronica have donated trees to Trees For Troops, every year since it’s inception. 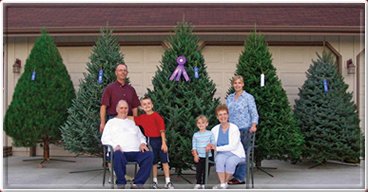 Dan Jr. and Julie’s children, Jack and Sophie, are the newest members of our tree growing family.  Will they take Hanauer’s Tree Farms into its third generation?  Stay Tuned!