Colorado spruces are a popular evergreen tree with stiff evergreen needles that range in color from blue-green to silver. Seedlings generally grow to about six feet tall in seven to eight years after planting. Full grown spruce trees have been known reach heights of ninety to 135 feet tall with widths of twenty to thirty feet. However, most Colorado spruces planted near homes measure thirty to ninety feet tall and ten to twenty feet wide at maturity. While Colorado spruce grows relatively slowly, it is long-lived and may reach ages of 600-800 years.

One of the most appealing physical qualities of the spruce is its shape. Colorado spruce evergreens have wider branches at the base that taper off towards the top to form a pyramid shape. Its size and shape make the spruce an extremely attractive landscaping evergreen. Colorado spruces are especially popular in areas with snow during the winter months because the pyramid shape catches snow while still blocking cold winds. 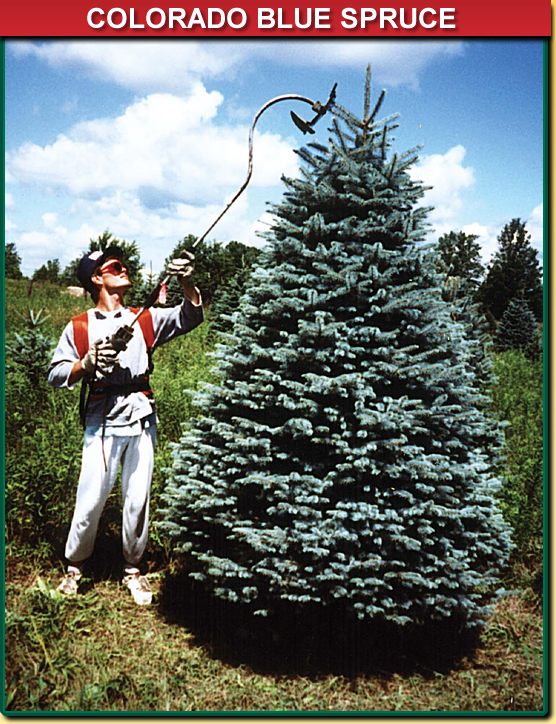 In addition to their physical appearance, Colorado spruce evergreens are also extremely popular because of their adaptability to most regions. Although the spruce prefers areas with acidic sandy soil and full sun, blue spruces can be grown in almost every state of the United States from the deep south (Zone Eight) to the northern border states (Zones 2 and 3). Colorado spruce trees will even grow in the southern areas of Alaska. The Colorado spruce will survive the heat of the summer and the cold of the winter, which makes this tree an ideal choice for homeowners in temperate regions.

Because the Colorado spruce is native to the Rocky Mountain area, this tree will tolerate poor quality soil and is fairly drought resistance. Colorado spruces prefer sun but will tolerate partial shade, at least until the tree towers above surrounding plants and structures. Note that, as with most evergreen varieties, the soil in which a spruce grows will become more acidic than neutral, which limits the types of ground-covering plants that will grown beneath these trees.

Colorado spruce is finding increasing popularity as a Christmas tree as a result of its symmetrical form and attractive blue foliage. The species has an excellent natural shape and requires little shearing. Additionally, needle retention is among the best for the spruces. Its popularity as an ornamental leads many consumers to use Colorado spruce as a living Christmas tree, to be planted after the holiday season.